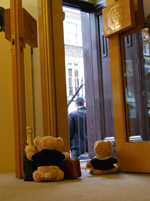 Since the crack of dawn Margarita had been running round 42 Beauchamp Place excitedly organising a picnic, and asking Chrissie‘s opinion on which pearls to wear so that she’d look her best.
Edward, however, was calmly catching up on the FT How To Spend It magazine (page 12!) while warmly wrapped up in his Henley Royal Regatta jumper.
Several minutes later Margarita appeared wearing a stunning pearl necklace, Jubilee diamond studs, and her matching warm Henley Royal Regatta jumper.

They were ready to go!

Walking down Sloane Street they smiled at the scene of Union Jack Flags flying from every rooftop and children running along with their faces painted.

It was just then when Edward and Margarita spotted their friends Edwina and Bob, smartly dressed in their Policemen uniforms. Bob kindly offered to help Edward carry the hamper and Champagne.

After filling themselves with enough food to last the week, Edward and Margarita jumped up and started looking for a good place to watch the boats from.
This proved tricky especially as Margarita had forgotten to pack her heels so was unable to see above the stone wall. Quick as a flash Edward found a tree that they could climb that would give them the perfect view point.

As the last boat went by Edward said to Margarita that they should head back home. Margarita smiling at Edward nodded and they both walked off into the sunset.