When you think of a Tower does The Shard spring to mind? Maybe the story of Rapunzel and her extraordinary long hair. Then again how about The Tower of London…
This historic landmark was a prison and last home to several well known characters through history. For example the Duke of Clarence, Edward V and his younger brother Richard, and Anne Boleyn and her magnificent pearl necklace.
More recently it has been home to the art installation ‘Blood Swept Lands and Seas of Red’, which marks one hundred years since the first full day of Britain’s involvement in the Fist World War. 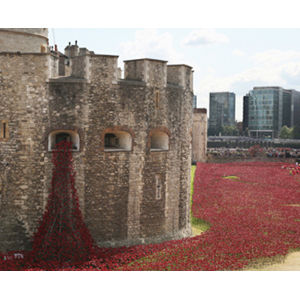 The ceramic artist Paul Cummins and stage designer Tom Piper created the installation with each ceramic poppy representing a British military fatality during the First World War.
Our Pearl Specialist , Chrissie Douglas, visited this extraordinarily moving installation and reflected on some of her ancestors lives lost in the “Great War” lives she knows about purely through family pictures and posthumous medals.

The Tower of London for the most part of it’s ‘life’ has been at the center of pain and sorrow, seeing its’ inhabitants come and go as fast as Henry VIII wives or faster still.
However, there is one permanent tenant…The Crown Jewels.

Pearls, diamonds, rubies, sapphires, the list goes on.
The perfect ‘sweety shop’ for every girl!

A few pearls that particularly stand out for us are the Hanoverian Pearls.

Featured in the famous ‘Armada portrait’ of 1588, they adorn Elizabeth I; proudly displaying her wealth, wisdom, purity and beauty.

Queen Elizabeth I bought these pearls for 12,000 crowns during her reign using treasury money. A few hundred years later the English crown became part of the House of Hanover,  these beautiful and priceless pearls continue to be in the possession of all the reigning English monarchs to this day. 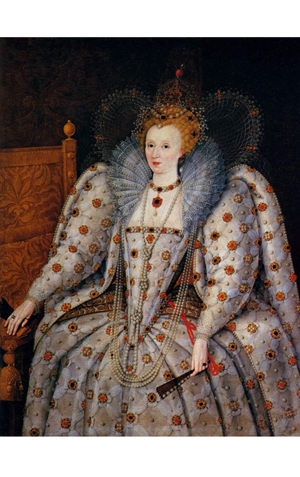 The term “Hanoverian Pearls” comes from the dispute arising between Germany and Great Britain over the claim laid on their ownership, as the current ruling English monarchs are descendants from the house of Hanover. Germany laid a claim on these pearls as they argued that any family jewels which were passed on during the transition time in the British monarchy should rightfully belong to Germany, thankfully it was proved that the money that acquired these pearls came from the treasury and therefore rightfully belong to Great Britain and are likely to stay on these shores.

Fancy collecting your own pearl treasure?

Our Pearl Showroom, located at 42 Beauchamp Place, London, SW3 1NX, is full of breath-taking pearls strung in an array of designs. From Biker Chic pearls to the Twin-set and Pearl look…
Coleman Douglas Pearls has it all!