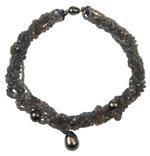 Labradorite was first found in 1770 on the Labrador Peninsula in Canada, an area from which it received its name. However, it is also found in Finland, Madagascar, Australia, Mexico, Norway, Russia and the USA.
Once discovered, it was taken back to Europe, where it was valued for its beauty.

This stone shows a stunning play of colour called

If not viewed from the best angle, its hidden beauty can be missed.
It is usually dark grey, but in the right angle of light, it displays a variety of bright colours, such as electric blue, olive green, golden, soft lavenders and pinks.

Labradorite is one of the most beautiful and fascinating minerals – with its coloured spectral glow which rolls over the surface.
This effect is not the result of any surface colour. Light internally reflects across partitions in the stone caused by differential cooling, creating this labradorescence. The colours seen on the surface vary depending on the angle of light hitting the stone.

We will be open from Monday to Saturday 11am – 7pm until Christmas Eve, which will be a shorter day 10am – 2pm.
Coleman Douglas Pearls will be resting with Santa until just before Epiphany on Thursday 5th of January, when we resume our regular hours of 11am – 7pm, Monday to Saturday.