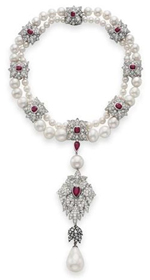 This Tuesday, 13th December, one of the most impressive jewellery collections around will be going ‘under the hammer’ in America, and who you might be asking, owned this impressive collection? Why the gem connoisseur herself, Elizabeth Taylor.

Over the past few weeks we have looked at some of the stones that will be featured at this auction.
2 of the gems that you should keep your eye on are,
The Taylor-Burton Diamond
and
La Peregrina Pearl, pictured on the left, set onto a lavish diamond, ruby and pearl necklace.

The word Garnet automatically conjures up images of intense deep red gemstones typically used in Victorian jewellery. However there is more to this stone than meets the eye.

Despite being commonly believed to only form in this deep red colour Garnets occur in a wide and dazzling spectrum of colours, from fresh grassy green to a zesty orange, the only colour Garnet doesn’t offer is blue.
Each colour is named as a different species and the Garnet family has over 20 different species! The more well known deep red species is called ‘Pyrope Garnet’ whereas the less known but equally as spectacular vivid green is called ‘Demantoid Garnet’.

Not only are Garnets varied and beautiful

but also durable with a hardness of 7 on the Mohs scale of hardness.
With all these merits it’s hardly surprising that Garnets have adorned the necks of nobility and historical figures throughout centuries past.
In Roman times Garnets were the stone of choice to be set within the butter yellow gold signet rings, used to stamp important documents.
More recently in the Middle Ages it was the most favoured stone of nobility and the clergy.

d gemstone by gem connoisseurs and aficionados. A combination of all their merits, but especially their vast spectrum of colour can keep up with the ever shifting fashions.

So, if you love the warm pure tones of  autumnal colour then Garnet is the stone for you!