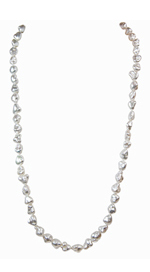 The word ‘Keshi’ means Seed in Japanese.
They are made when a natural pearl happens to be created in a pearl farm or when the epithelial tissue and nucleus central to cultured oyster pearl formation in a cultured pearl fail to attach to each other, and the oyster expels the nucleus bead.
Once this has happened the epithelial cell tissue begins to secret layer upon layer of nacre in the pearl sac, eventually creating the Keshi Pearl.
Epithelial cells are found in a special tissue called the mantle at the hinge of the mollusc.
The layers of nacre that they secret play a vital role in the pearl’s luster.

Nacre layers are very thin, translucent and reflect light, thus creating the pearl’s distinctive luster. Generally the thicker the nacre with regular, thin and transluscent layers, the finer the luster will be on the pearl. In other words luster is caused by the reflection on the surface of the pearl and the passage of light through the layers of nacre that appear to make the pearl glow from within.

Although a Keshi Pearl could well be a natural pearl in composition, it must always be described as Keshi, because it grows in a cultured oyster.
Keshi Pearls can be found in a variety of colours. Gold, white, grey, peacock black etc.

If you would like to buy some Keshi Pearls please come to our Pearl Showroom, situated at 42 Beauchamp Place, London, where we will be happy to show you several Keshi strands.
As well as offering you a wide selections of Coleman Douglas Pearl designs and Pearl strands, we also provide a superb Bespoke, re-stringing and re-designing service.