The greatest love story ever told… It can only be Shakespeare’s Romeo and Juliet.
‘Did my heart love till now? forswear it, sight! For I ne’er saw true beauty till this night.’ – Romeo
This September marks the 50th anniversary of Kenneth MacMillan’s Romeo and Juliet ballet masterpiece, with ballet companies around the country performing it, and members of the public, including a few members of our Pearl Company, racing to see it.

During Shakespeare’s life he had several patrons, one of his most famous being Elizabeth I, aka The Pearl Girl!
Never seen without a strand or two/three/ten, Elizabeth I, would do anything to get her hand on pearls. Kill, ‘borrow’ or take, no pearl was ‘safe’!

In this painting you can see from the magnitude of pearls being worn how much she desired them.
But did you know that Elizabeth I also wore imitation pearls?

Wax filled Venetian glass beads with an iridescent finish were sewn onto her dress to look like ‘pearls’.

They were the first pearl impostors of the time each costing 1 penny.

The first imitation ‘pearls’, as we know it today, were created in France by Mr Jacquin who concentrated fish slime from a Bleak and mixed it with varnish in the 17th Century and called it “Essence of Orient”. This method is still used to this day to make man made fish slime covered plastic beads. The fish slime that is used nowadays comes from Salmon and Herring. 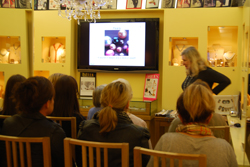 Don’t fall into the trap of buying imitation ‘pearls’, book a place on one of our Pearl Talks happening throughout the year. Chrissie Douglas, our In-House Pearl Specialist will guide you through several techniques that will enable you to clearly distinguish between real pearls and imitation beads.

For no girl should be wearing fish slime around her neck!

One thought on “The Greatest Love Story Ever Told…”