Have you noticed the gem of choice in many of the recently released films? Our Pearl Team have.
It’s a PEARL PARTY!

Let’s focus on one film in particular, ‘Woman in Gold’.
Staring Helen Mirren as an octogenarian Jewish refugee, Maria Altmann, she takes on the Austrian government to recover the Klimt 1907 masterpiece, Portrait of Adele Bloch-Bauer I, which was confiscated by the Nazis from the Bloch-Bauer mansion in Vienna, a piece of artwork she believes rightfully belongs to her family. 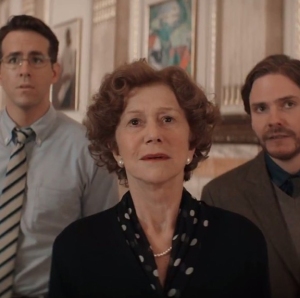 Throughout the film you see a selection of pearl jewellery gracing the frame of Maria, played by Helen Mirren.

Two items that kept appearing were the large pearl stud earrings and the delicate single strand pearl necklace seen in the image on the right.

Another film where Mirren was decked out in pearls…Coleman Douglas Pearls, was the action thriller ‘The Debt’.

Set in 1965, the film follows the lives of three Mossad agents who cross into East Berlin to apprehend a notorious Nazi war criminal. However, thirty years later a ‘secret’ comes back to haunt them which they must deal with.

Throughout this film Helen Mirren wears our grey pearl studs with optional tahitian pearl drop, our South Sea Pearl Strand Necklace, as well as a selection of other Coleman Douglas Pearl company jewellery.

Do you fancy owning pearl jewellery that is suitable for court rooms, secret agent missions and everything else in between?! If so our Coleman Douglas Pearls London showroom is the place for you. Located at 42 Beauchamp Place, London, SW3 1NX, our Pearl Center is open Monday to Saturday from 11am to 7pm.