Pierce Brosnan, Jason Momoa and Jonny Depp, all actors who have played ‘warrior’ roles in films.
But what else do these actors have in common…PEARLS!
Yes you heard right, all three men have been spotted wearing Tahitian Pearl pendant necklaces in magazines and on the Red Carpet.
And it’s not the first time men have been seen wearing pearls, just look through history.
Julius Caesar’s love of pearls is said to have been a contributing factor to his invasion of England in 55BC! Other pearl enthusiasts include Charles I, Steven Tyler, Elton John, Pharrell Williams. 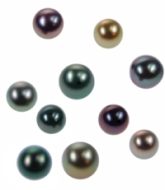 Tahitian Pearls are naturally dark colour ranging from grey to black and peacock green to aubergine.
However, on rare occasions you can sometimes find them very light, from white to yellow and pink, all of which have grey overtones. 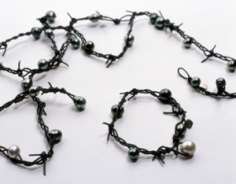 some Tahitian pearl jewellery to your look?
If so you’re in luck. Our Pearl Guru, Chrissie Douglas, designed a whole collection called ‘Warrior’, which is full of knockout leather and Tahitian Pearl necklaces, earrings and cuffs, and having won the Tahitian Pearl Trophy award for innovative design, I’d say this is a must for your ‘warrior’ look. 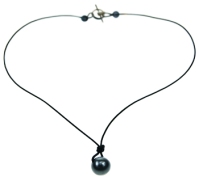 Our Tahitian Pearl pendant, a favourite of the actor John Shepherd, is made up of a lustrous dark Tahitian round pearl on a strong black leather plain thong, allowing the pearl to take centre stage.
The necklace is finished with a classic sterling silver T-bar clasp.

If you fancy more detailing on 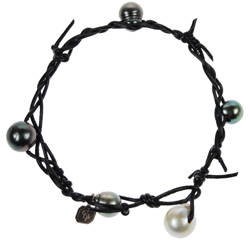 your leather then our Tahitian Pearl and leather bracelet was made for you.
The leather has been woven together to look like barbed wire interspersed with cultured pearls for a truly ‘tough guy’ look.

To view more of our pearl and leather collection as well as several other Coleman Douglas Pearl designs call into our Pearl Center.